July 30 is World Day against Trafficking in Persons

Human trafficking is a crime that exploits women, children and men for numerous purposes including forced labour and sex. Since 2003 the UN Office on Drugs and Crime has collected information on about 225,000 victims of trafficking detected worldwide. Globally countries are detecting and reporting more victims, and are convicting more traffickers. This can be the result of increased capacity to identify victims and/or an increased number of trafficked victims.

Every country in the world is affected by human trafficking, whether as a country of origin, transit, or destination for victims. Traffickers the world over continue to target women and girls. The vast majority of detected victims of trafficking for sexual exploitation and 35 per cent of those trafficked for forced labour are female.

What You Need to Know About Human Trafficking in Canada

A common misconception is that human trafficking is a distant issue – a problem that only affects third-world countries.

What you may not realize is that human trafficking is a genuine issue in first-world countries such as Canada, too  – and it’s often first-world citizens perpetuating the crime.

Human trafficking is the fastest growing, and most lucrative criminal offence. It is not to be confused with human smuggling, which is the transportation of exploited individuals.

Human trafficking, on the other hand, is the deliberate control of a person for the means of exploitation. Meaning that women aren’t being smuggled to far away, third-world countries – they’re being recruited and trafficked in our own back yard.

The problem has become such a massive issue in cities throughout the country that the Edmonton Police Services in Alberta, Canada officially renamed their Vice Unit to the “Human Trafficking and Exploitation Unit.”

Victims are hunted by predators online, in malls, coffee shops and at other social gatherings. Predators can often be personable, charismatic and friendly. And targets often suffer from low self-esteem.

Have we, as Canadians, accepted that human trafficking is a real threat to us?

Have we taken the opportunity to talk to our daughters, friends and sisters about the risks, signs, and dangers of human trafficking?

Or have we turned a blind eye to it?

Over 90% of women being trafficked in Canada are Canadian citizens. The average age for individuals exploited is 13 years old. The statistics are a staggering reminder that the children of our country are not immune to becoming victims of this crime.

The first step to ending human trafficking is preventing it. To prevent it, we have to be aware of it.

Be wary of flashy, charismatic personalities that are quick to cross boundaries.

Have open conversations with the women and children in your life that this is a very real possibility in today’s society.

Be mindful of people’s lifestyle changes and their financial situations.

It’s imperative to preach internet safety to children and teenagers. By opening up online to strangers, they become a prime target for different types of inappropriate conduct.

Knowing the signs of human trafficking is another major component to ridding Canada of it. Organizations have identified different signs of human trafficking. Victims may have odd tattoos (which may be branding tattoos). They may be submissive, anxious, paranoid or nervous. You may notice that they are directly controlled by another person or don’t have personal money or resources. Victims may also be malnourished or unaware of their surroundings.

It’s important that we come together to abolish “modern-day slavery” and keep our children safe.

In order to do this, we have to acknowledge the facts and find the courage to have uncomfortable conversations. Someone’s life – perhaps of someone you know and love – is counting on it. 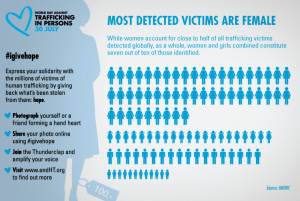 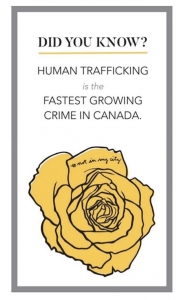 Want to join the discussion?
Feel free to contribute!

Support Services in & around Regina, SK during COVID-19
Scroll to top